Kaho gives a small nod toward the woman, but seems to looked over the menu and responds, "I think I will try the Lapsang tea actually, but the pork belly does sound good as well." She gives a gesture of confirmation toward the server before turning back toward the fire nation woman, a more scrutinizing expression on her face.

While her gaze seemed somewhat cautious,  Kahos relaxed seating showed little hostility, and her tone could imply curiosity over suspicion.
This user is a former member
Lin Lua'Kahn
Oct 12, 2020 20:10:48 GMT -6

Lin half strode, half stumbled, into the Moonpeach in a clatter of metal armor and scanned the room quickly with green eyes. She briefly, very briefly, took in the current inhabitants of the tea house before finding a relatively lowly occupied corner to go brood in. With each step Lin's Guan Dao's pommel spike thumped against the floor and with each step she had another tie on her armour loosened. By the time she found a chair to seat herself in she had hauled the helmet off her head and set it down on the table in front of her while hauling her plate hauberk over her head and settling it on the floor.

A deep sigh of relief escaped Lin as she settle back into the chair in her padded gambeson. She propped her Guan Dao against the wall behind her, the heavy blade pressed down to the ground. Patiently, albeit not visibly with how her eyes scanned for the person in question, Lin waited for a server or proprietor to come by. The woman didn't quite seem pleased by the rude young woman disarming herself all over the floor, but took her order anyway with only a mild glance at the armour.

"Ginseng, please. And anything with meat on it that.... this can get me." Lin pulled a handful from her pocket and smacked the contents on the table. When she pulled her hand away she frowned herself in disappointment at the lack of coin that actually presented itself. She had thought there was more there. The proprietor did not look anymore pleased, and made no promises about the food as she took Lin's money, but she did head off to acquire the requested tea.

All the while Lin leaned back in her chair and scratched at her neck absent mindedly at dark crust of... something. She wasn't sure if it was blood, mud, or just some dirt. And at this point she wasn't sure she cared as she flicked the remainder onto the floor.
This user is from the EF
Xiaoyu
Nov 22, 2020 14:33:04 GMT -6 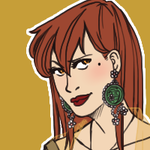 "Well spotted," she replied. "I'm here visiting my brother. He left home some ten years ago and is eking out a living as a tailor in a village here. Father disowned him, so I have to visit him in secret, pretending that I'm on some sort of shopping spree. I'll stop by some shops and overload on clothes and jewellery before heading home."

She took a bite of bao and waved away concerns with a dismissive flick of her other hand.

"Anyway, it's not like travel between Nations is forbidden, really. It might be a little difficult all things considered, but there are still some friendly ports for people who aren't soldiers and militia and such."

The bao was really quite good; the sauce dripped off her fingers as she took another bite into the pork belly, the fluffy, slightly-sweet but more neutral tasting bao offsetting the richness of the meat. Surreptitiously, however, she picked off the small leafed garnish at the top an placed it onto her plate. She hated the stuff, which to her tasted strongly of soap—a trait that, apparently, did not make itself known to everyone. Her brother, for instance, delighted in the stuff and thought it tasted wonderful.

With a soft chime, the bell above the cafe door rang again as a new person entered; this one was even more out of place looking than the last; clad in armour, the newcomer seemed to shrink into themselves and slunk into a corner table. As they divested themselves of their armour (much to what appeared to be the proprietor's annoyance), Xiaoyu was surprised to see the somewhat dirty face of what seemed to be a young woman.

Xiao watched with bright-eyed interest as the newcomer tried to scrounge up enough coins for a meal; since the café was relatively empty, it wasn't hard to overhear the young woman's low voice. As the proprietor made her way back into the kitchen, Xiaoyu pulled her aside and whispered to double the young woman's order, slipping the proprietor two gold coins. She also ordered, in a regular voice, a slice of cake.
This user is from the FN