A Trip to the Circus [tag: Ling]

Nonetheless, I went in disguise. With my Earth bending I could fight off any highway robbers that I came across, but I had no interest in trying to deal with any Earth Kingdom armed forces I might come across. Luckily for me, Yu Dao's strategic location between the Fire Nation and Earth Kingdom meant that we had ready access to Earth Kingdom clothing. Instead of my usual red colored clothing, I wore a green dress robe. The shopkeeper claimed that it was the type of clothing worn in Ba Sing Se's middle ring. I reluctantly forwent wearing any jewelry or other accessories that would mark my status as a socialite.

I was accompanied by two servants. I had told my family that I was travelling to Omashu to scope out potential trade partners and they insisted that I bring along help. Fortunately I managed to bring along two elder servants who slept in. In the early morning I made my escape from them. I left a note stating that I had gone to explore the nearby caves and would return by nightfall.

When I arrived at the circus grounds proper I wandered around the food stalls. It was then that I realized we had not agreed on where to meet. 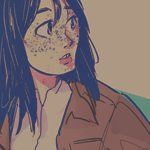 Ling ran a hand through her hair and grimaced. It was still sleek, shiny, and bone-straight after her trip into Ba Sing Se's middle ring. Thankfully, it was no longer done up in one of those ridiculous coifs they wore in the upper ring, with the oddly shaped planks of elaborately carved wood and ornate floral decorations. She was back in her usual light brown trousers and plain shoes but made one small concession to Ho-Tin's remarks about her appearance: she wore a changshan in a deep, almost black, navy blue that off-set her normally blue-grey eyes in such a way her irises appeared almost white.

Did one dress up for a trip to the circus? She had no idea, but she felt that she would at least get some odd looks if she showed up looking like a ragamuffin.

As she approached the gate, a nagging feeling that had followed her from the local inn finally became clear: she and Ho-Tin had not agreed on where to meet.

"Great..." she muttered under her breath as she handed her ticket to the ticket-taker. Briefly, she engaged him in conversation and asked if he had seen someone matching Ho-Tin's description. He shook his head, stating he had just switched out with the person who had manned the booth before him not ten minutes ago and he hadn't seen anyone bearing a resemblance. Ling thanked him anyway and made her way through the crowds and into the circus.

It had been years since she had gone to the circus; the last time was about a year before Father had passed away, and Ling sighed wistfully as the smell of deep-fried dough and sugar reached her nose. Vividly, the image of her father's grinning face flashed in her mind's eye. He had the same gap-toothed grin that she did, with powdered sugar all over his dark beard.

Her stomach grumbled, and Ling made her way to the food stalls before searching for Ho-Tin.

But, it seemed Lady Luck was on her side after all — there, at the fried dough stall that Ling had made a beeline for, was Ho-Tin. She was in a green dress robe and was (Ling thought) rather uncharacteristically not covered in jewelry.

I munched on the fried dough as I thought over my predicament. My best option might be to return to the ticket booth and wait for Ling there - but what if she had already entered and was wandering the grounds?

I jumped when I heard her voice. I turned and found myself face to face with Ling. I took a deep gulp of air and tried to regain my composure.

It was hard to say the word. I could imagine my ancestors spirits' crying out in agony at the thought of one of their descendants being middle income. The shame!

I looked Ling over. I still wish she'd let me do her make up, and a pair of earrings would help, but it was an improvement over last time.

"It looks like we have met in the mid- midwly. Where are my manners though?"

I motioned my box of fried dough balls towards Ling, "Would you like some?"

Ling laughed good-naturedly at Ho-Tin's discomfort over the term middle class (spirits forbid!) and helped herself to a proffered dough ball. It was as good as it smelled and she sighed in contentment, and pushed aside her desire to see her father once more.

"I thought you'd like the shirt," she said with another laugh. "It's even silk, I'll have you know. I almost wore a dress, but honestly? After having been stuffed into one for the last week I don't think I could stand to even come within an inch of putting one on for a good, long while. I figured this was a good compromise."

She glanced around, taking in the sights of the circus with interest. People-watching was a fascinating — and, in her line of work, useful — hobby. Then, a thought occurred to her. Ling looked first one way, then another, then back at Ho-Tin.

"I would have loved to have seen you in a dress, but I will take the silk shirt."

I tried to imagine Ling wearing one of my spare dresses, but I had to admit that it didn't look quite right. Maybe she'd look best in a Water Tribe dress? Or maybe she was better suited for an Air Nomad dress? What did an Air Nomad dress look like? When I thought of the Air Nomads I could only picture the rigidly dressed Air Nation Army that we covered in history class. Now that I thought about it... Did the Air Nomads have any women? I was snapped back from my stream of conscious when Ling asked about my entourage.

I lowered my voice and put a finger in my lips, "Oh yes my entourage. They're following me in disguise of course. I wouldn't want to advertise my status would I?"

Returning my voice to normal, "So tell me have you been to the circus before? I hear they have a fire breather!"

Ling arched an eyebrow, but said nothing. There was a distinct air of untruth to what Ho-Tin was saying; perhaps a hovering entourage had managed to slip under her normally observant eye, but her gut told her otherwise. Ho-Tin must have her reasons, Ling surmised, and pretended to believe her.

"Oh, sure," she answered, turning her gaze to the yakitori stand as if she was fully captivated by the smell of roasting meat (it wasn't that much of a stretch, honestly). "Though it's been a while. We last went with my father, a couple of years before he so ungraciously passed away. A shame, really, an odd-numbered group at the circus always makes seats under the big top hard to come by."

She kept her tone light and irreverent. There was a sharp pang in her chest that always showed up whenever she spoke of her father out loud. Whatever nonsense was spewing out of her mouth now was on reflex. It never occurred to her that what she was saying might make Ho-Tin uncomfortable; her mother and sister were quite acclimated to her inability to seriously discuss any non-superficial emotion.

"A real firebreather would be interesting," she added, "though I'm skeptical. It's usually some sort of trick with oil in the mouth or something, and then they just use regular firebending. I hear that a certain General was a true firebreather, but that's just according to the tall tales you hear in Ba Sing Se. Most of them weren't even in the city six years ago."

Ling made her way to the yakitori stand and whipped out her coin purse. She ordered enough skewers for herself and Ho-Tin, under the assumption she'd be asked to share. While she waited for the vendor to finish grilling the meat, she turned to her companion.

"What do you want to do first? I gather you'd rather take the time to do stuff while we're here, rather than just conducting business and parting ways."
This user is from the WT
Anonymous
Oct 8, 2020 12:17:29 GMT -6

I stayed quiet when Ling mentioned her father's passing. If there was something that all the nations agreed on, it was on the pain caused by the lives the war had cost. I assumed her father died in the war at least. The war was responsible for most men's death.

Luckily for me most of my family were desk officers in the home islands. Still, we had our fair share of cousins who died in the front.

I briefly opened my mouth to ask where he had been serving before thinking better of it.

As we spoke we walked to the yakitori stand.

"Well I don't know if you'd find it childish but..." I said as I pointed over to one of the stands. The vendor had set up a table with several small fish bowls. Around the table people tried to throw miniature cabbages in. Every once in a while someone would succeed and be rewarded with the fish.

Next to that stand were several similar game stands. One had patrons trying to knock over figures of past avatars using cabbages. Another was a test of strength and participants were given an oversized mallet to hit cabbages with. I couldn't help notice a common theme.

Ling took the skewers from the vendor and handed a few to Ho-Tin. She nodded at her companion's suggestion of playing some games.

"Sounds good to me," she said, taking a bite of meat.

Obviously, the boardwalk games were a con. Coconuts in an oblong shape and in uneven holders to make them near impossible to knock off, shelves of stuffed animals slightly skewed so they wouldn't tip over easily, bowls where most of the openings were smaller than the thing you were trying to put in them. It's not that you would never win; obviously, just enough people needed to win in order to make the games appealing. But, your chances were slim unless you knew exactly how the game was put together.

She glanced around to see which game had the best odds, then pointed to the one that had you knock over some Avatar figurines.

"Let's try that one," Ling suggested, "and save the fish for right before we leave. It'd be a pain to have to lug a fish wherever we go, you know?"

Taking another bite, she sauntered over to the stall and slapped down a few coins. The man running the stall grinned at her, and replaced the coins with three cabbages.

Her other hand still holding the skewers, Ling picked up one of the cabbages and threw it as hard as she could—not at the figurine, but the base right below it. The figure wobbled precariously for a few seconds, but ultimately didn't fall.

The man running the stall glared at her; Ling grinned back, and handed a cabbage to Ho-Tin.
This user is from the WT