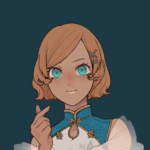 "Here you go," she murmured, handing a wailing bundle to an exhausted, but joyous woman propped up against her headboard. As mother and child bonded for the first time, Kioko wiped the sweat off her brow on the nearest fresh towel. She opened the dingy bedroom door leading down to an even dingier living room in a squalid tenement, waving her arm to catch the attention of a bedraggled-looking man and his children. The man's eyes light up and he bounded to his feet, children in pursuit.

"Mother and baby are both healthy," she reassured him before he could speak. "Mum needs some bedrest for a few days, so everyone has to pitch in a little to keep house, okay?" She glanced around and smiled at the children, who were nodding enthusiastically. "Wonderful! I'll be back in a few days to check on both mum and baby. If you have any questions or if you're worried, please be sure to call the Nai Umareta house straight away and either I, or one of the other midwives will come by."

She finished placing the dirty linens in the special burlap sack she always took with her every time she left Nai Umareta house; most of the patients in the Dragon Flats district didn't have a way to properly clean linens and instruments so the nurses always saved the washing for after they returned to the house. Stifling a yawn, she stripped off the standard issue white gown nurses always wore to protect their clothing and shoved it into the sack, along with the white cap used to pull her hair back out of her face — and more importantly, away from her patients.

Picking up her medical bag, Kioko slipped out of the house silently; the family was too busy welcoming their newest member and there was no need to make a fuss about her departure.

Carefully, she affixed her bags to the back of her bicycle before getting on and slowly peddling her way back to Nai Umareta house. The last thing she wanted to do after staying up all night was to pedal home but the house didn't have its own car — that was something they hoped to be able to get, one day.

She had only gone a few blocks when there was an unholy crash. Kioko slammed her pedals backward and lept off her bike, grabbing her medical bag in the process. A car, apparently attempting to evade the RCPD officers behind it, had crashed into a milk truck. As the police swarmed over the scene, Kioko pushed her way to the front. "Excuse me!" she shouted, elbowing her way through. "Nurse! Make way!"

Songin was new at this, fresh out of the academy not so many months ago.

That wasn't going to stop him from enforcing the law to the fullest extent of his abilities, and he wasn't about to let some low life crooks get away from a member of the elite Metalbending Police. He was selected for his bending aptitude and on the recommendation of several bending masters, they were no match for him.

Perhaps even too much so.

After a sickening crash, Songin struggled briefly to halt his vehicle safely before rolling out smoothly and ready to deliver the hurt at a moments notice. Tipped over on its side, its frame deformed, the vehicle was clearly in disrepair. What he couldn't see was the state of the occupants inside, so he waited for them to come out... and waited. There was a groan, and Songin quickly realized his day got a lot more difficult. The onlookers and bystanders began to press in, slowly forming a crowd. He would have to deal with that first, secure the area of the threat.

"Everyone step back!" He commanded as he took an authoritative position in front of the crash, "This area isn't safe, move along and go about your business!" He called out, once he was satisfied his commands were at least heard (if not fully heeded), without hesitating, he strengthened his stance, put his palms together with his hands in a point, and thrust them to either side. The metal roof of the vehicle was skillfully torn apart to reveal its occupants. Ready for confrontation, he wasn't prepared when a civilian plowed her way through his verbal "perimeter" behind him. Momentarily distracted, he snapped at her out of the peripheral of his vision, keeping an intense focus on the crash site.

A moment of processing later, he was starting to pick the pieces up. It was clear the immobile passengers inside the totaled vehicle were no threat any longer, and only just now was he comprehending what the civilian was saying - nurse. Fortunately, that just happened to be what he needed in this situation. He got lucky.

"You there, you said you were a nurse? I need your assistance while I radio backup!" If he got positive confirmation, he would bolt to his stopped vehicle to get on the horn and let his superiors know of the situation, before he would resume keeping the perimeter and assisting the first responder wherever possible in his position. The other police vehicles that were in pursuit were beginning to arrive, but it was his responsibility to ensure command was kept appraised of the situation.

"I'm telling you, I'm a nurse! There could be injured people-- "  Kioko huffed indignantly as an officer stepped forward and waved his arms, effectively cordoning off the area. Her brow furrowed as she puffed out her cheeks in irritation. She had a duty to help those in need, and she would be damned if a police officer got in the way of that. With a strength and determination belied by her shorter, plumper stature, she shoved her way past the throng of people and into the clearing.

The officer snapped at her to stay back, hardly glancing in her direction, but she stood fast. "You must be joking," she retorted, loudly. "I am a nurse, sir, and I must insist."

As if her words had finally reached the officer through a marsh, they turned to look at her as if seeing for the first time, then asked her to confirm her occupation.

Kioko nodded firmly. "Yes," she repeated, "I am a nurse. Nai Umareta house can vouch for my occupation, should you like to ring them first." There was a hint of sarcasm in her words; Nai Umareta was well known in the city as a house of healing. Led by lady monks who felt called away from their temples to a more active duty of service, Nai Umareta provided medical services to the poorer areas of Republic City; not all of the inhabitants of the house were monks, but all were licensed and registered nurses and midwives.

She waved her hand, effectively dismissing the officer to take care of their duties while she turned to survey the wreckage. The officer would need an examination as well, but there were no visible injuries and he seemed in full control of his faculties and speech so he could be examined last. A concussion was likely, based on force of impact, perhaps some whiplash that would need physical therapy and medicinal pain management for a while.

The milk truck driver seemed dazed, but also okay; the milk truck didn't have any doors so the driver was knocked out of the vehicle and away from the wreckage. She motioned for him to step aside and recruited a bystander to help him. "Make sure he doesn't fall asleep and keep his head still. Keep him talking until I can examine him further."

She returned to the wreckage; the occupants of the totaled vehicle — the vehicle that was being pursued by the police — were still and bleeding. Without further thought, Kioko tossed aside her grey woollen cloak and pushed up the sleeves of her dark red uniform.

"Sir? I'm Nurse Kioko, can you hear me?" She managed to wrestle the door open as the driver gave a small moan. There was a large gash on his forehead; knowing that head wounds tended to bleed more profusely than their causes would suggest, she dabbed at the blood gently with her sleeve. As she thought, the cut wasn't very deep. "Sir, can you speak?"

Next to him, the passenger hadn't so much as groaned. With some effort, Kioko reached over and felt for a pulse. It was there, but weak and thready.

She poked her head out of the vehicle. "OFFICER?" she shouted. "OFFICER! Please call for an ambulance immediately!"
This user is from the Water Tribes